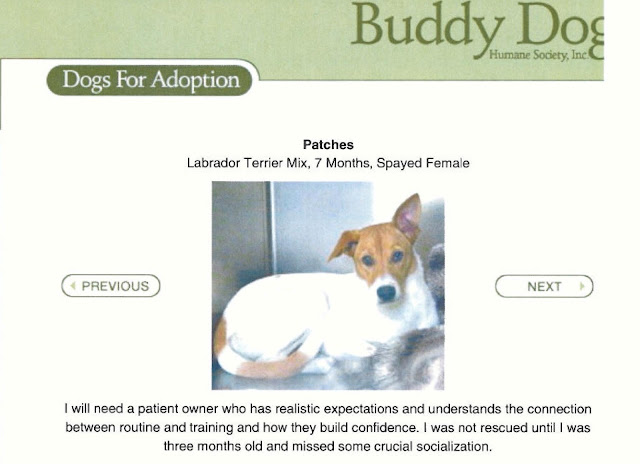 The first time I saw Maggie was her adoption listing in April 2008. I completely forgot how this was worded, what the fuzz was I thinking! (Mr.Man wasn't surprised at all, he says that I like projects.)
He had been going home for lunch everyday since his new job was so close, so I said that he could walk a dog while he was there. He wasn't sure if this was a good idea since we already had the 4 cats. It was near my birthday, so whenever he asked what I wanted I just said "a dog".
He agreed as long as it wouldn't eat the cats. I went by Buddy Dog Humane Society after work, since we had adopted Cocoa & Ozzy there the year before, and saw this shy dog curled into a ball at the very back of her kennel. I sat on the floor outside for about 20 minutes and then asked if I could take her for a walk. They said that the staff had been carrying her everywhere since she was too scared to walk. We figured that I might as well try, so I slipped a collar over her head, said "come on, little dog" and she walked through the shelter to the outside. She was very scared of the cars and parking lot, but relaxed once we went down the trail behind the shelter. She liked being in the woods, and seemed terrified of anything related to civilization. We didn't realize that she thought men were extra scary, since she was so fearful in general. 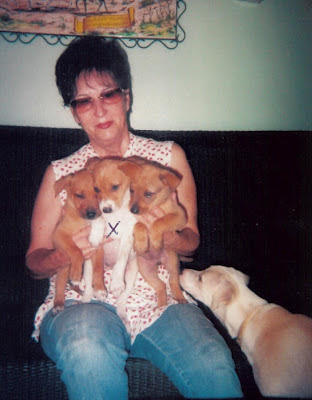 This is a picture of Maggie that was in a card written by Margie; she and Doris found Maggie with "her mother and siblings in an abandoned house. They were very scared of people and strong noises. They were approximately 3 months old. They had skin problems because they were in an area that looked like a garbage dump. It was a horrible place." She wrote that she kept Maggie longer than the others as "she was shy with people" and "needed more time to teach her to trust us."
She filled up the entire inside of the card and the back with information about her "special baby." It was obvious how much she cared. I love the "X" on Maggie and the way the other dog is looking up at the puppies. I hope Margie will see this someday and know how grateful we are to her and the others at Save a Sato in Puerto Rico for saving Maggie and thousands of other dogs like her and Duke from a short life on the street. 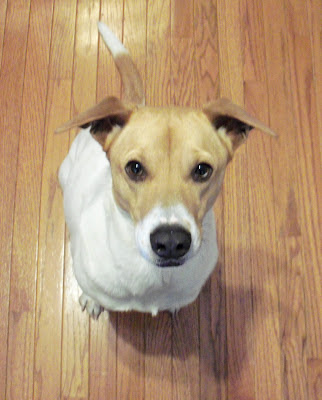 Buddy Dog has worked with Save a Sato to find homes for stray and abandoned dogs for more than 10 years. As education, spaying and neutering reduced the number of homeless pets in New England, the shelter had room to take in dogs from PR and the southern US. They never turn away a local dog in need to take in dogs from other areas.

Four years later, I'm still so glad that Maggie is the dog we brought home. She's doubled in size, more than doubled in confidence and is the best velcro dog I could have picked. I wish I could wake up as happy and full of energy as she does every single morning. She's no longer scared of mailboxes, trash cans or cars, and will trot down the sidewalk with her tail in the air as traffic goes by. She loves to run in the rain, isn't scared of thunder and knows when to stop teasing the cats. She still gets startled sometimes and doesn't let many people pet her, but has finally started to like scary Mr.Man. Not bad for a dog that missed some crucial socialization!
Posted by 2 Punk Dogs at 10:09 PM