On June 30, 2006 we brought Serena home as a friend for the Dude. He had been driving our older cat Daisy crazy after his best friend Lilly had to be put to sleep after a severe illness. We found Serena at the Kitty City Adoption Center, which is run by SPIN, or Stray Pets In Need, at Pet World in Natick.

Serena had just been spayed after having a litter of kittens. She had been found with a colony of cats living in an old mill building, and SPIN fostered her until she had the kittens and they were old enough to go to homes of their own. The adoption counselor suggested Serena as she was friendly, playful and would not be intimidated by a pushy tiger cat, plus she was the same age, only 1 year old.

At home, Serena hopped out of the carrier and instantly started playing with all of the cat toys. The Dude and Miss Daisy looked horrified, and weren't sure what to do with this weird new cat. Daisy gave her disapproving stares and Serena was smart enough not to bother her.


The Dude decided to go with sneaky ninja attacks. You can see how well that worked. I think Serena was relieved when we got Ozzy and Cocoa, as the Dude then had someone else to focus on instead of constantly mounting really obvious sneak attacks!


Serena still seems like a perma-kitten with her round face and squeaky little voice. She has soft bunny fur and tends to bunny hop instead of running, which is really cute, but does tend to get the dogs' attention. She is a sweet little cat that loves to cuddle, but she'll definitely stand up for herself, whether it's against a tiger cat now twice her size or an overexcited punk dog who wants to play chase.

Happy Gotcha Day, Serena Maria Antonia Sanchez! (Not that anyone asked, but she was named Serena at SPIN, the Mr. added the rest, and no, our last name isn't Sanchez, though that would be cool.) 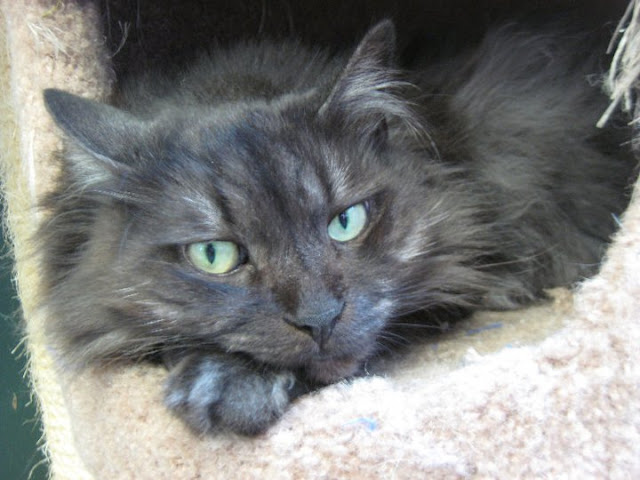 This is Winston, an 8 year old DLH (Domestic Long Hair), possibly a Maine Coon mix. He was adopted from Buddy Dog some time ago but his owner passed away, so he's back to find a new home. He loves people but would prefer to be an only pet. He's very friendly, a video of him purring is here. 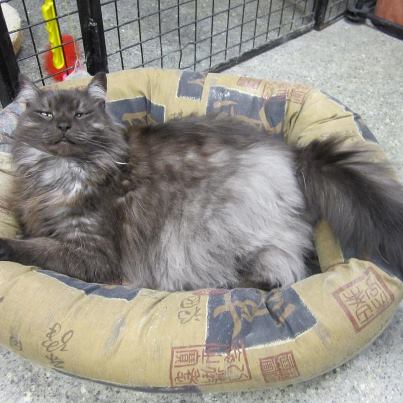 You can really see Winston's beautiful fur in this shot of him testing out a newly donated bed. 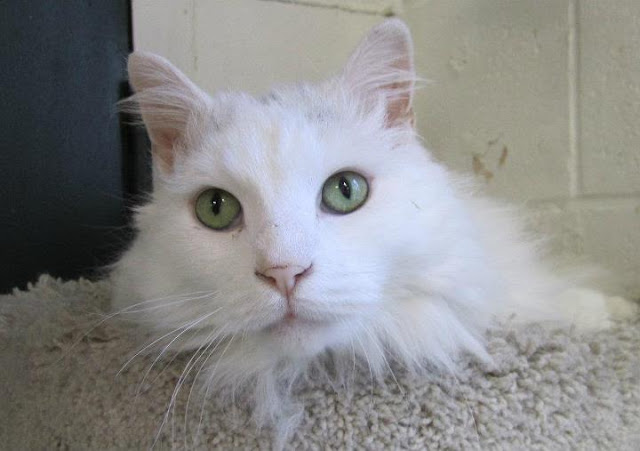 This is Star, a 12-year-old female DLH. Star is friendly with other cats and people, though she can be a bit nervous around little kids. She's a cuddly lap cat who will make a great companion for a quiet family. 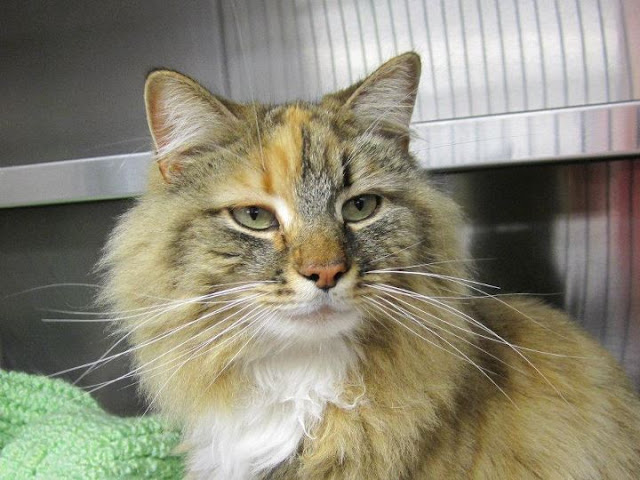 This is Ella, a 5-year-old female DLH. Ella was used to being an indoor/outdoor kitty, but now would prefer to be an indoor cat. She is friendly, enjoys attention from people and playing with her toys. Ella is looking for a quiet home with adults or a family with kids in their teens.

I've heard people comment that they would rather adopt a younger cat that they would have longer or that would be more playful. After adopting The Dude as a teeny 2 1/2 pound kitten that used to get stuck behind bookshelves or under the stove, I'd much rather have an older, calmer cat!

We adopted Ozzy and Cocoa as 7 year old cats and they're still fun and playful at 12 years old. One of my first cats lived to be almost 17, and she was active and healthy until the end. I don't miss looking for our little maniac kitten, as he's now a 5 year old 16 pound tiger who's pretty easy to find. Serena is our permanent kitten at age 5 with her round face and squeaky meow, plus she still chases her tail!

Buddy Dog Humane Society does have many younger cats with short hair and different colors, but if you're looking for a fluffy love bug, go meet Winston, Star or Ella as soon as possible! 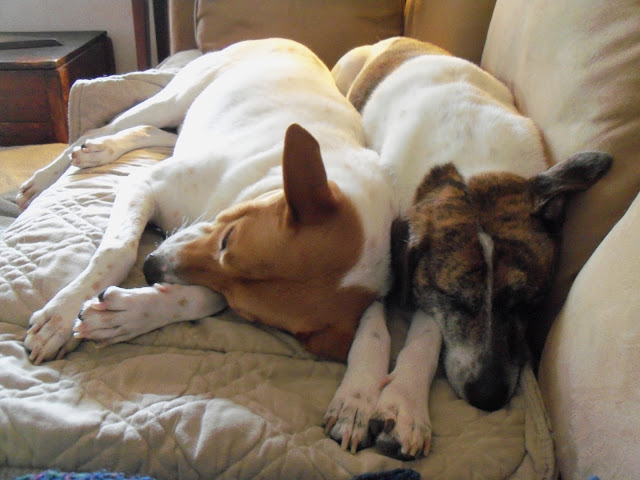 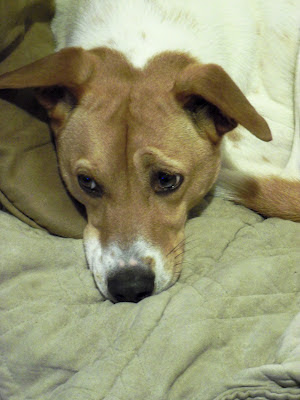 The other day someone at work asked if they ever get puppies at Buddy Dog, since they rarely see any on the website. New dogs have a quarantine period, plus they usually need shots and basic vet care, so by the time puppies are ready to be posted on the site they've already been adopted by people who have walked through the shelter. The same is true of kittens versus adult cats.
Anyway, here are a few of the puppies and younger dogs available at Buddy Dog. 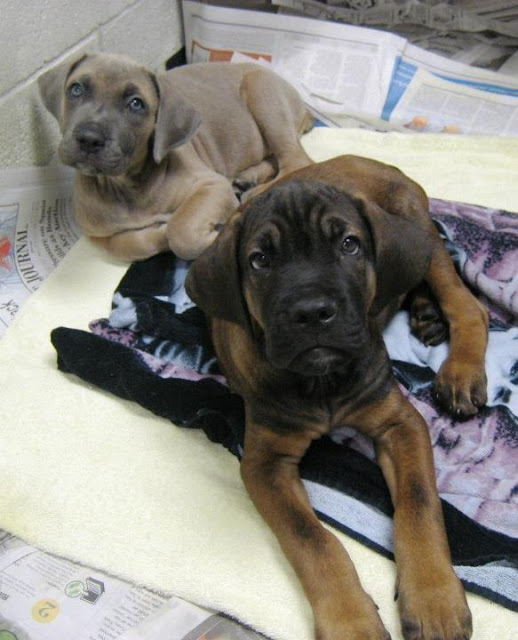 These cuties are Valky and Vieques, 3-month-old male Weimeraner mixes. For more information about these puppies or to check their availability, please call or visit the shelter and speak to an adoption counselor. 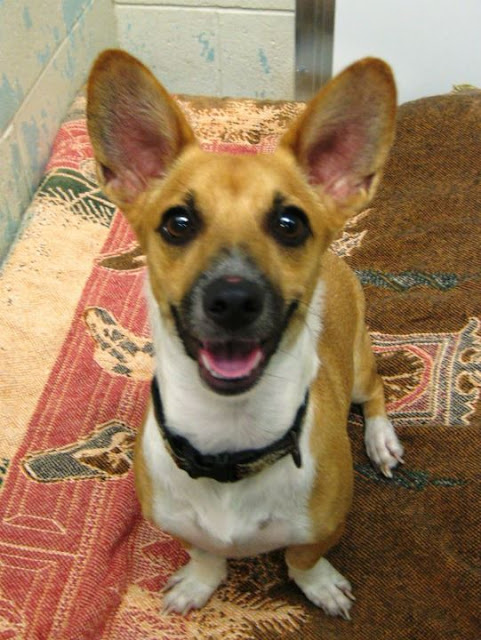 This is Boris, a 1-year-old male Corgi mix. He is playful and has an awesome personality. Boris is crate-trained and knows how to sit on command. He is good with dogs with similar energy and older kids, but hasn't been 'cat-tested" yet. This smart little guy will make a great companion for an active family. 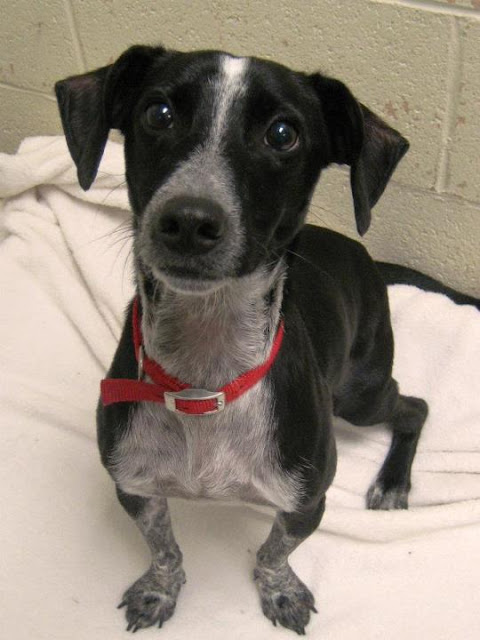 This is Bones, a 1-year-old male Sheltie mix. He is playful and happy, he was found as a stray and came to Buddy Dog to find a new home! Bones is good with older kids and he seems to be housebroken. 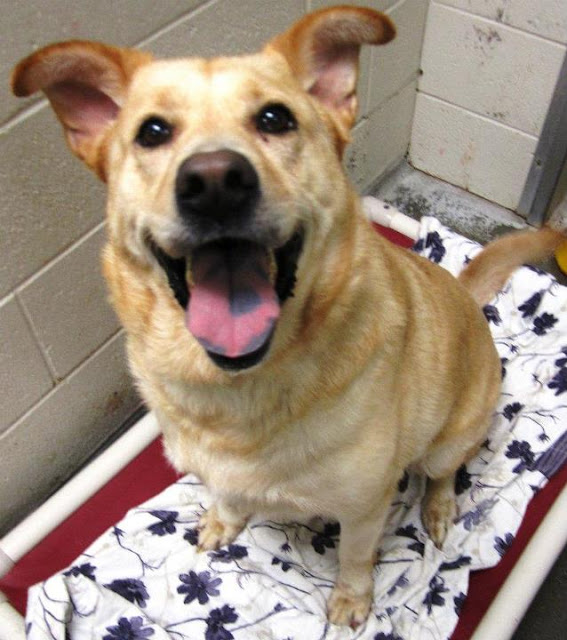 Okay, I couldn't resist this face, even though she isn't a puppy! This is Pooh, a 6-year-old female Labrador mix. This sweet girl came to the shelter because her family was ill and could not take care of her. She is housebroken and seems mellow and laid back. She is used to a fenced-in yard, and she loves to go for walks. She hasn't had much exposure to other animals but she is good with kids ages 10+.


Maggie and Duke are going to the Whisker Walk, as there are at least 45 different shelters and rescues participating, plus over 50 vendors. A list of the groups, sponsors and vendors is here, most have special raffles, auctions and events at their booths. We found Lupine leashes for Maggie and Duke for only $7 each last time, there are lots of other great deals on gear and lots of treat and food samples. There are a bunch of food options for people too, from all sorts of grilled food to carnival food like cotton candy, candy apples and fried dough. Good thing there's a walk, there is ice cream too!

Preregistration for the walk is from 11am to 11:30am for those who are walking to support a specific organization and are turning in the donations they have raised. The line up for the actual Walk is at 11:50, with a Blessing of the Animals before the 1 mile walk at Noon, which is over mostly flat terrain.

There will be Frisbee and Flyball demos, a Reiki demo and Reiki for your dog and amazing pet photographers. CMDART, the Central Massachusetts Disaster Animal Response Team, has set up an agility ring where you and your dog can try out real agility equipment. There is a Canine Carnival where you and your dog can win prizes playing Tennis Ball Fetch and other games. There is even a "poop bag" raffle, where a deposit of a bag gets a free raffle ticket to win a pair of F1 Boston racing passes - who doesn't love indoor go karts? There is much more to see and do, it is really worth the trip!