The Dude was really sick a month ago, the right side of his face swelled up overnight and he had trouble breathing. I only took one picture, and he looked so awful that I don't even want to look at it, much less post it. Luckily his blood work and X-rays came back clear, and it seems like he had an upper respiratory infection combined with an allergic reaction to a lysine supplement. He had an ephedrine shot and an antibiotic shot one day, and the vet came to the house the next night to give him a steroid shot. He was back to normal by the third day!

Technically we probably could have waited to see how the shots worked and not done the X-rays and bloodwork, and the vet did give us that option. We had been planning to X-ray the bump on his tiger chin anyway once the vet's building was finished, now at least we know he didn't have pneumonia or metastasized bone cancer. Seriously, googling pet medical issues can give me a heart attack!


People frequently ask if Maggie and Duke are from the same litter, since they look alike and get along really well. Duke is a year younger than Maggie, and her mom was spayed after being rescued by Save a Sato. (They might have the same dad, as they were both street dogs with mystery dads.)

Finding Duke was a little bit like the story of Goldilocks and the Three Bears.

The first dog we met was a beautiful pit bull puppy, who was too hyper for Maggie and kept jumping on her even when Maggie snarl faced and snapped. Mr.Man and I really liked that dog, but Maggie wanted to eat her face. She did NOT like having a giant puppy that was already her size climbing all over her and wanting to PLAY nonstop!

This is Mississippi, she's available for adoption through Worcester Animal Rescue League (WARL). She's one and a half and has that same type of fun puppy personality as the dog we wanted to adopt, if Maggie would have let us. WARL is running an adoption special through October 31 where you get to decide the adoption fee, so go meet Mississippi or their other cute cats & dogs! They have a lot of sweet pit bull and pit mix dogs, Sierra recently earned her Canine Good Citizen Certificate!


We went to Buddy Dog to see the next dog, who was an adorable little chihuahua, very friendly and laid back. Maggie had no interest in this dog at all. Maggie likes most dogs, but completely ignored her, even though she was very polite.

This is Liana, she's available for adoption through Buddy Dog Humane Society. She's 8 months old and has a similar personality to the cute chihuahua that we met, as Liana loves other dogs and cats too! Like Maggie and Duke, she can be a little shy at first, but is great with older children and adults. Buddy Dog has all sorts of dogs, including hounds, labs, a purebred rottweiler, a pair of beautiful shepherds and quite a few cute smaller mixed breeds, including a pug/beagle mix. They have a lot of friendly and playful cats available for adoption too.

Maggie really liked a beagle/whippet mix that we met while at the B.O.N.E.S. Beagle Bash. When I saw a listing for a 1 year old whippet mix on the Buddy Dog site, I called about him, even though there was no picture. Duke wasn't even supposed to be listed yet, as he had just been transferred from another shelter. He had been labeled "fear aggressive", and the shelter had been talking about sending him back to Puerto Rico to live in a feral dog rescue for dogs deemed "unadoptable."

Luckily one of the people who worked there called Buddy Dog and asked if they would take him. He was there for 2 days when we brought Maggie to meet him. When Maggie saw Duke she sat right next to him like she already knew him. They went for a walk with no issues, so we let them play in the fenced area and they ran around together. Back inside, Duke jumped up on the seat next to Mr.Man, who said "What fear aggression?" We brought Duke home that day, on Halloween 2009.


When we brought Duke home he went right into Maggie's XL crate with her. (He did go into his own crate at night when we said "go to bed.") They're still pretty much inseparable, though Duke will sometimes go lay on the couch with Mr. Man or hang out on the bed with the cats, while Maggie is my velcro dog.

Maggie definitely likes male dogs more than females, which may have been part of the reason she didn't warm up to the first two dogs. There are so many great dogs at shelters, and the people who work there do such a good job at finding the right match; it really wasn't hard to find the perfect dog for our picky girl. Getting Duke was the best thing we ever did for Maggie, she loves having a little brother to boss around. The video below is them playing on Duke's first night home.

Duke and The Dude 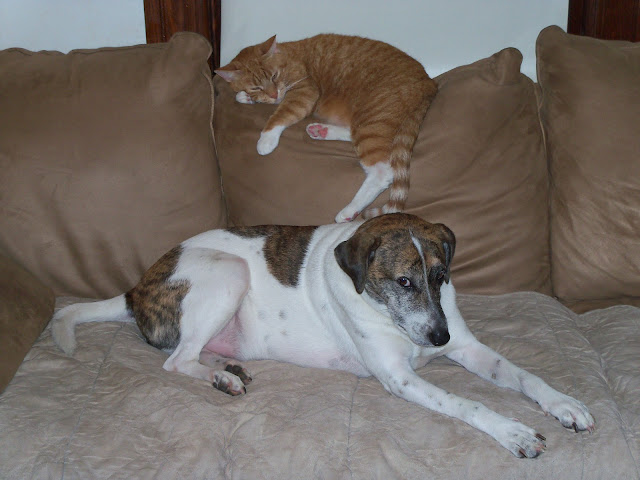 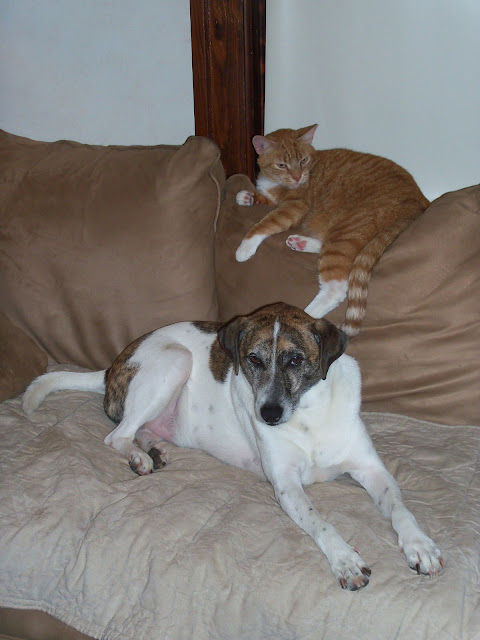 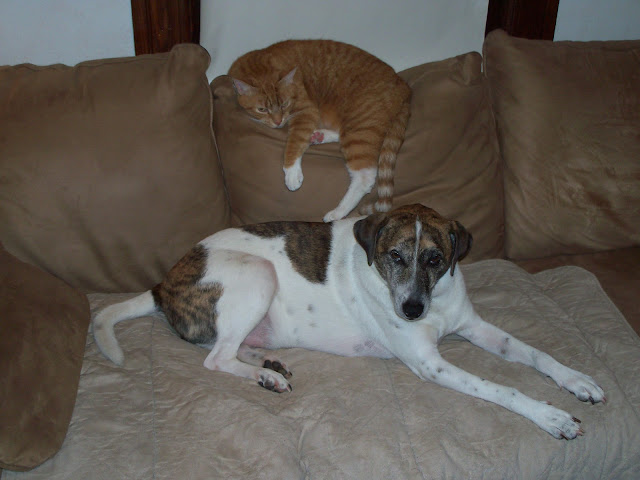 Save the Pibble House!


It still makes me tear up to think of what Sandra and her family have been through in the past year. It's bad enough to lose your house and everything you own in a fire, but to lose 5 dogs at the same time just adds to the devastation. The amazing Two Pitties in the City wrote about it at the time in their blog post.

Though the family had home insurance, it only covered 3 months of living expenses, while it has taken 10 months to rebuild the house. Not only did they have to make the construction loan payments on a house they weren't able to live in, they also had to pay rent for a room for Sandra, her husband, their baby and their 2 remaining pitbulls. Their insurance also didn't cover contents, so they had no money to replace the things they lost, like basic clothing, beds, etc. When Sandra had to go on bed rest due to complications of her pregnancy they fell behind on payments on the construction loan, and now the bank has notified them that they will foreclose on the unfinished home. Here is the latest update from Kissa-Bull.

A link to the full Chip-In page to Save the Pibble House is here, or you can click the Chip-In button above. Please donate whatever you can afford, even $5 can make a difference. If 42 people can donate $5 each, that will raise enough money to save the house. The 5 dogs they lost in the fire are buried in the backyard, I can't imagine having to leave them under these circumstances. By helping them you'll be helping a family that has been rescuing dogs for years. Thanks for anything you can do!

I am the worst dog blog reporter ever. I did not take even ONE picture at Woofstock!

Luckily we met the awesome Lulu and Wally at Woofstock and their cool Woman put pictures up on their blog, check them out at Life with Lulu & Wally, too!

Buddy Dog also had a great photographer there, you can see the album at the Buddy Dog website plus pics of the beautiful cats and dogs available for adoption.

We also met the beautiful Bella from Bringing Up Bella with Leslie and Jan and even got to see her handsome Borzoi boyfriend Gus. Lily the Hero Pitbull was there too, she was super sweet and is raising money to help pitbulls find foster and forever homes.  There were many adoptable dogs from breed rescues, including the cuties from  Long Island Bulldog Rescue. There were so many friendly dogs there, we can't wait until next year!
Posted by 2 Punk Dogs at 6:00 AM 11 comments: 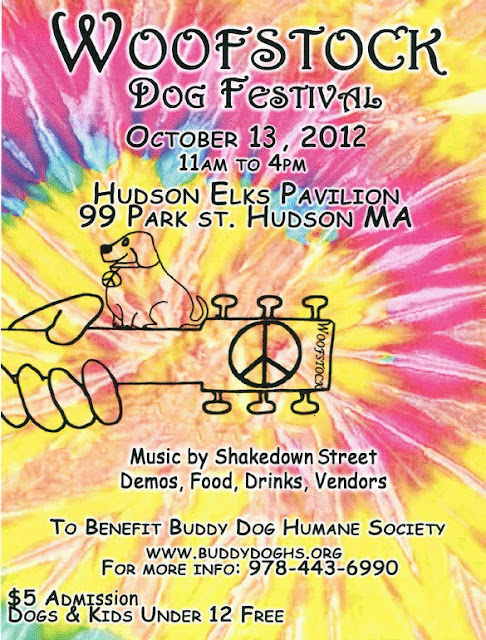 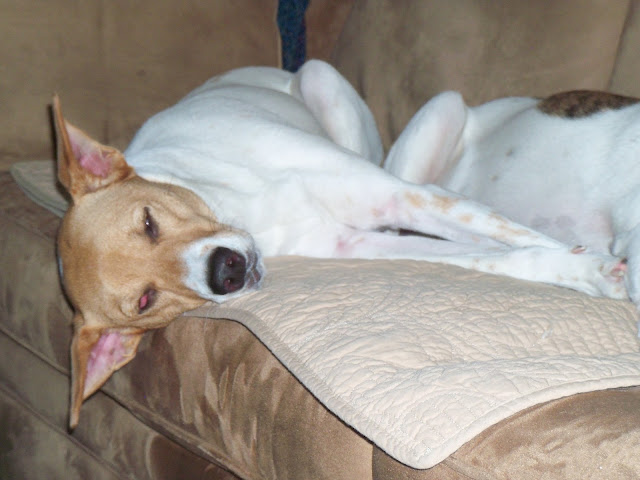 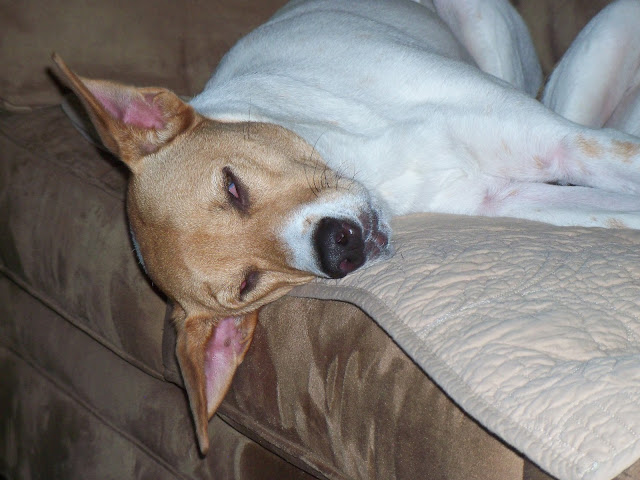 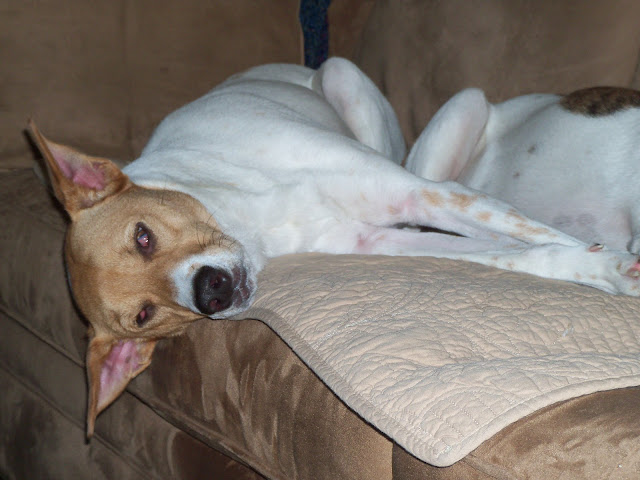 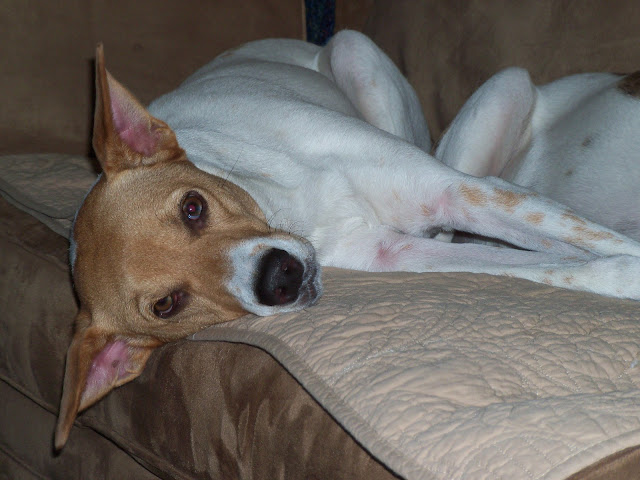 
I brought our little Lebowski, aka The Dude, home on October 2, 2005. I had only seen one blurry picture of him in an email from a coworker whose son had found 6 cats and 2 litters of kittens at his new house. We were expecting a 4 month old kitten, not a teeny 2 1/2 lb baby, now it's hard to believe that our 15 pound "fat kid' was ever this small!

We should have known this crazy face was going to be trouble! He climbed curtains, got wedged behind the hutch, and climbed into the back of the stove and fell asleep in the bottom drawer on the broiler pan. I probably wouldn't have found where he was if our older cat, Miss Lil, wasn't staring at the stove. He just blinked and yawned when I pulled the drawer out, as if I had just woken him up from the coziest nap ever.

The Dude is usually found with Ozzy, and gets along with everyone, especially the dogs. He was very sick last week, and the dogs didn't eat their breakfast until he came back from the vets. The poor cat barely made it out of the carrier before they were sniffing him and running around him in circles. Luckily his X-rays and bloodwork were clear, and the ephedrine, antibiotic and steroid shots cleared up his respiratory infection. He's pretty much back to normal, which is good, because it was awful to imagine life without him.

Kuranda Dog(s) of the Month!


Maggie and Duke have a chance to win 5 Kuranda beds for Buddy Dog Humane Society!

Kuranda has a Dog of the Month contest, where the dog whose photo gets the most votes will have 5 beds donated to the shelter of their choice in their name! The punk dogs have already won a luxury Fleece Pad, which they will also be donating to Buddy Dog when it arrives (partly to keep them from shredding it.) 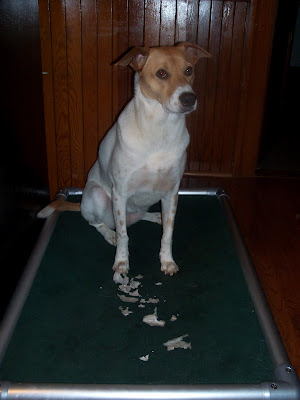 Maggie destroyed at least 10 beds before I called Buddy Dog to ask what type of bed they used for the destructive dogs.They have some of the PVC frame beds, which have held up really well, but Maggie is a super chewer (note the shredded mail) so we ordered the aluminum frame bed with ballistic nylon. It still looks great after 2 1/2 years of daily use by Maggie and Duke and the occasional puppycat or two. (The cats like Duke's bed more because it's right next to the heat vent.)

Please go to the Kuranda Dog of the Month contest and vote for Maggie and Duke so other shelter dogs waiting for their forever homes can have comfortable and durable beds too!