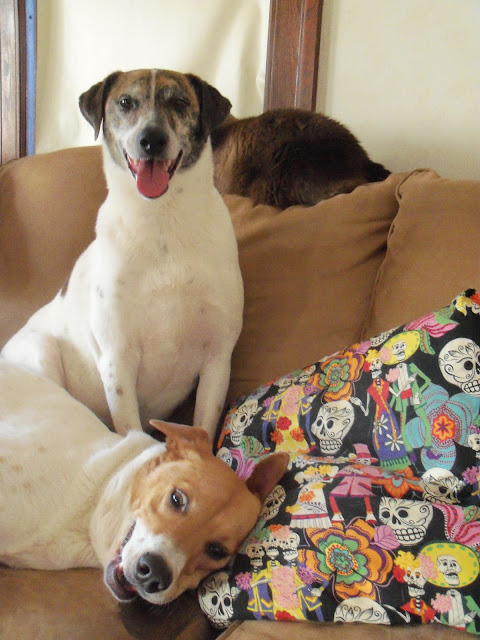 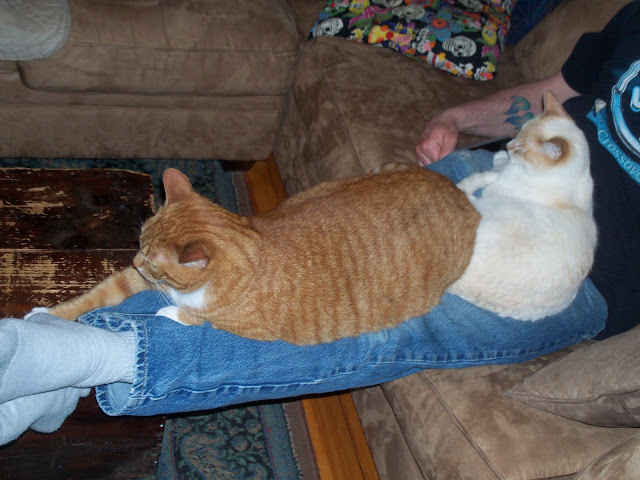 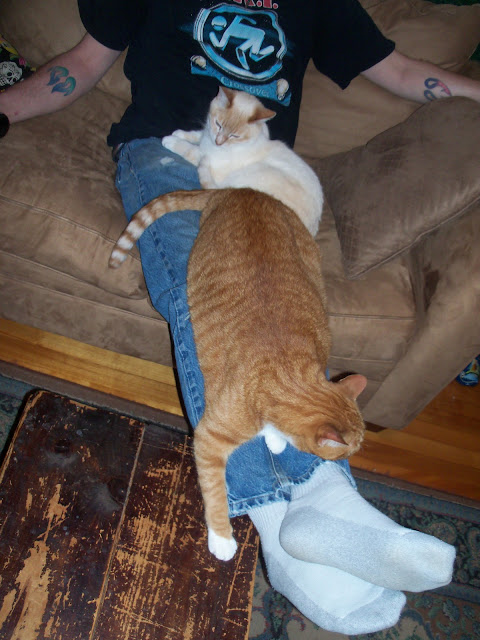 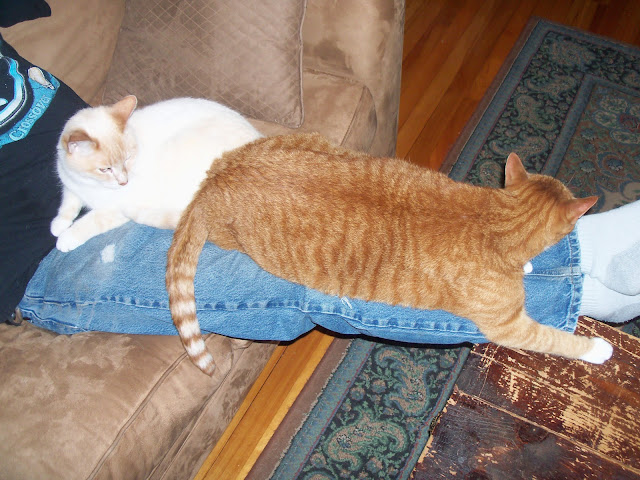 Maggie & Duke love to visit our friends' backyard, as it's large, wooded and fully fenced. They run up and down the hill and bark at anyone who approaches the fence. They check the perimeter when we first get there and then guard the yard from everyone, including the friends who own the house!


Duke had fun flopping in puddles and then rolling in pine needles and dirt. He had a lot of extra spots by the end of the day, and smelled awful! He had the most fun playing with a stuffed chicken and then burying it to hide it from Maggie when she was too interested.

Maggie has no interest in toys unless Duke is playing with them, then she wants to destroy them. She doesn't play fetch and looks at Duke like he's crazy when he runs after tennis balls and squeaky toys.


She would much rather patrol the yard and scare away all squirrels, birds and people.

Our friends bought the house recently and felt bad that they haven't had much time to work on the backyard. The dogs think it's perfect the way it is!
Posted by 2 Punk Dogs at 9:03 PM 7 comments: 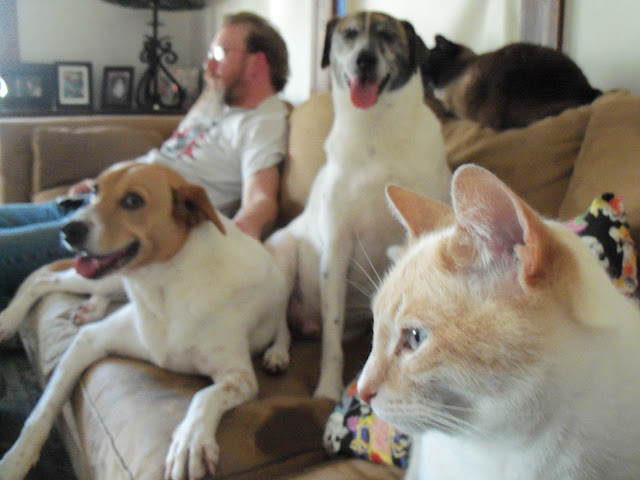 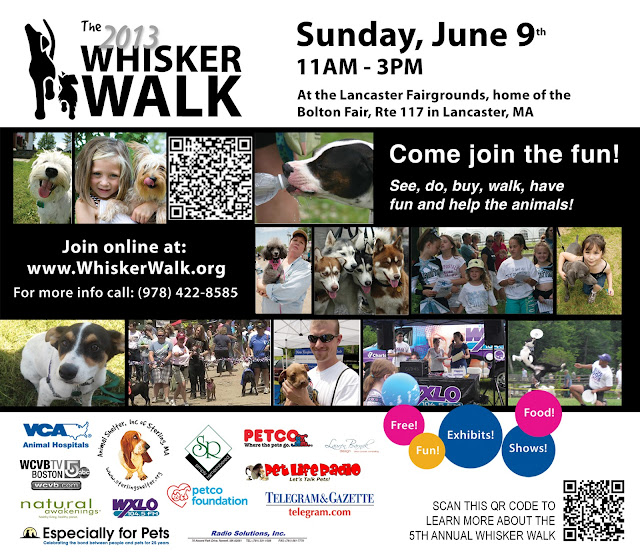 We're going to the 6th Annual Whisker Walk (there is the cutest Chihuahua at the beginning of their video!) tomorrow with Maggie and Duke. The walk is organized by the Sterling Animal Shelter, but it helps raise funds and awareness for at least 45 different animal rescues, shelters and non-profits from around the country. Click here for the full list of groups participating. There are also more than 40 different sponsors and vendors, and events including  CGC (Canine Good Citizens) testing by the Squakheag Akita Club and an agility course that your dog can try for a donation to the CMDART (Central MA Disaster Animal Rescue Team).
﻿


Maggie has tried the agility course 3 different times and Duke has tried it twice, I think we'll give them a break this year! Maggie isn't food motivated and Duke gets too nervous near the instructors/any new people standing too close, so we'll just check out all of the amazing groups and vendors. They both love being around big groups of dogs, big groups of people not so much, so it averages out. We can always tell that Duke is starting to relax when he finally takes a treat. We look like weirdoes, we get so excited that he's eating! People with normal dogs have no idea...
Posted by 2 Punk Dogs at 7:14 AM 14 comments: 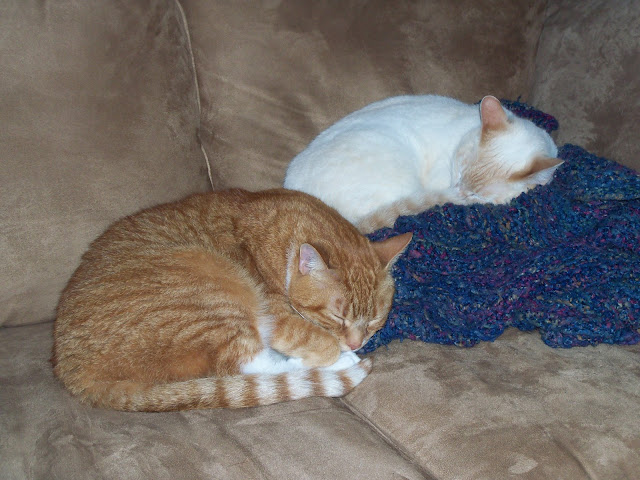 This picture of Maggie and her long distance boyfriend Stout was taken in Summer 2009.
Maggie fell in love with Stout the second she saw him, she ran over and started licking his face and acting like a silly puppy. It was the first time we had ever seen her so happy in the year since we brought her home. He was 110 muscular pounds to her skinny 43 pounds but we never had any worries that he would play too rough for her.
My brother's girlfriend adopted Stout when he was a tiny puppy from a litter of farm dogs. Jen is his favorite person in the entire world, he was watching her in this picture. We only see them a few times a year as it's a 4 hour drive each way, but Maggie is always so happy to see Jen's car in the driveway at my parents' farm. When we see a black lab anywhere she wants to run over and check if it's Stout.

Stout would rather lay on a hot gravel driveway near Jen than sleep on the lawn in the shade. He sat near Maggie when he could have gone anywhere else on the farm. Instead of hiding under the table or chairs, Maggie would sit out in the open when Stout was with her. Maggie would eat whatever food Stout was eating, even if she had turned it down before. She loved to hide in her crate until we went to visit and she saw that Stout didn't sleep in a crate at night. She howled and whined until we let her and Duke out and they slept on the air mattress with us for the whole week.

If Maggie wasn't so obviously happy having Stout around, I don't know how long it would have taken us to realize that she needed her own dog. It wasn't long after these pictures that we started looking for a buddy for her and we met a few dogs before Duke. Luckily Duke isn't the jealous type, as Maggie would still act like a lovesick puppy whenever she saw Stout.
Stout tolerated Duke and Griffin barking at him every time he came to visit my parents. He was so cool and relaxed that all of the dogs would calm down after a few minutes. He fit in everywhere like he belonged there, whether off leash on the farm, hiking with my brother and Jen or walking around Boston. When walking Stout I could instantly tell who liked dogs, as they would see this giant black dog and smile. People who were nervous around dogs would cross the street when they saw him, even though he was walking calmly on a flat collar.


Unfortunately Jen found a lump on Stout, and when she took him to the vet he said "to make sure Stout had a good summer." I wish there was a better way he could have said it, or that it didn't need to be said at all. He just made it to summer, as he succumbed to lymphoma this Memorial Day weekend at the age of 9. He was a great dog, and he left a big space to fill.
(I feel really awkward writing this, as he wasn't our dog, but he made a huge difference in our lives, especially for Maggie and Duke.)
Posted by 2 Punk Dogs at 9:18 PM 16 comments: