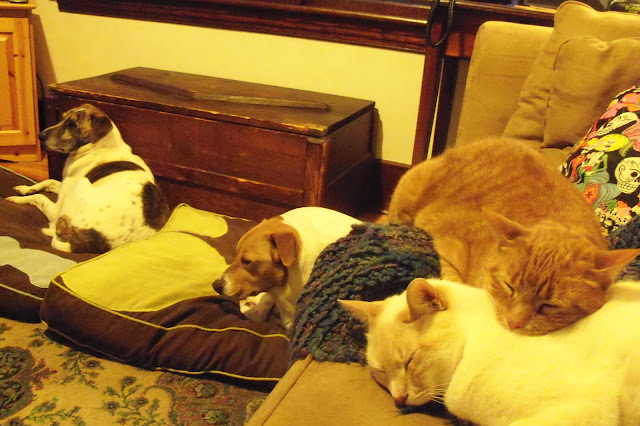 It's weird how Maggie & Duke, Ozzy & The Dude are best buddies. We had Maggie for about a year and a half when I finally convinced the Mr. that we should get her a buddy. We were going to get a "normal" dog, i.e. not fearful/not afraid of men, but we got Duke instead.

He was transferred to Buddy Dog Humane Society from another shelter, as they thought he was becoming fear aggressive. They were talking about sending him back to Puerto Rico to live on a farm with other feral or unadoptable dogs. One of the people who worked at the first shelter called Buddy Dog to see if they would take him. He was there for one day when we showed up to meet another dog. Maggie wasn't interested in the other dog, but liked Duke. He jumped up on the couch next to the Mr. who said "what fear aggression?" We brought him home that night. It hasn't been easy, but getting Duke was the best thing we ever did for Maggie. She loves to have a little brother to play with and boss around. 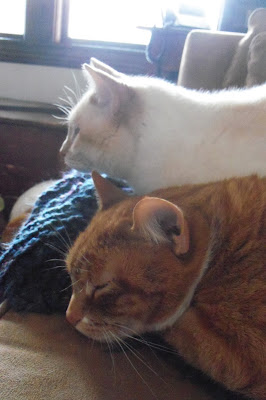 Ozzy & Dude have been inseparable since day one. The Dude loves to curl up on Ozzy & they both like to sit on Mr.Man. Ozzy is a skinny, gangly 8lb flame point Siamese who talks a lot & loudly. The Dude is a 17lb fat cat who has the squeakiest little meow, which we rarely hear (it sounds like we may have had him neutered too early). It's hard to believe that the Blizzard of Oz is about 12 and the Dude is about 7, they still run around like goofy kittens.

They both love to hang out with the dogs, even though Maggie thinks it's hilarious to jump on the bed to pop all of the cats off, leave the room to let them get settled & do it again. If I come around the corner to see what she's doing, she'll meet me at the doorway with a very innocent look on her face. I don't think she realizes that I can hear her run & jump onto the bed, hear all the cats hit the floor & then hear her thud onto the floor. Sometimes I catch her standing in the middle of the bed wagging her tail with poof tailed cats around the room. I'll see if I can get a picture one of these days. The tiger boys seem to think it's funny, but Cocoa & Serena are united in their disdain for the dogs.
Posted by 2 Punk Dogs at 9:21 PM