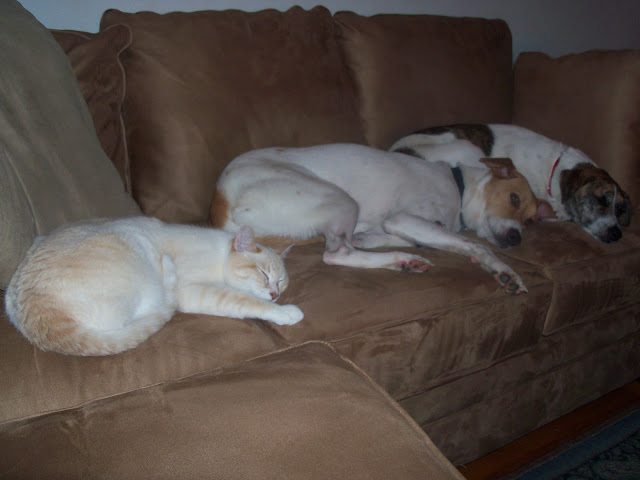 Ozzy loves to hang out with the dogs. I have no idea how an 8 lb skinny cat looks as big as a 43 lb dog, talk about weird camera perspective. Maggie loves to nose honk the cats so she can chase them, but Ozzy will sit up like a bear and box instead of running. Maggie was still thinking about trying it again. 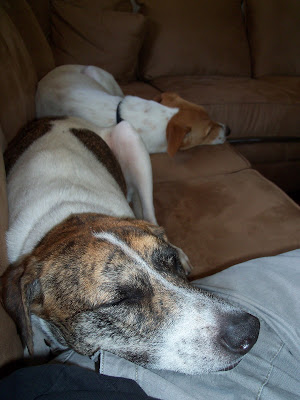 Duke loves to cuddle up to me or the Mr., whoever is on the cozy couch. People thought we were crazy to let the animals on the new couch, but we thought it would be okay if it was under supervision. This was before Maggie had a UTI & leaked all over 2 cushions; it took 2 weeks and a 24 oz bottle of enzyme cleaner to get rid of the smell. (yay Nature's Miracle) Her reaction to Proin was even less fun, think of the Exorcist in the kitchen. So glad the UTI cleared up & it's (hopefully) not related to spay incontinence.

As the mean lady, I booted them off the couch onto soft new dog beds. At $20 each from HomeGoods, I figured that it wouldn't be a huge loss if they were shredded. So far they've survived for about 6 months, only because the dogs are not allowed in the living room without us. Right now there is a ridiculous fake sheepskin throw over the dog beds so half the floor is covered by dog cozy land. 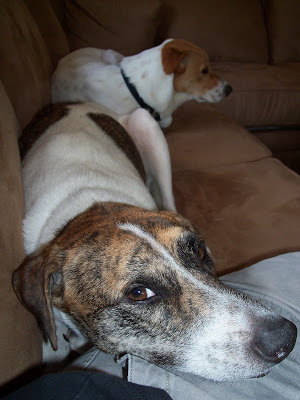